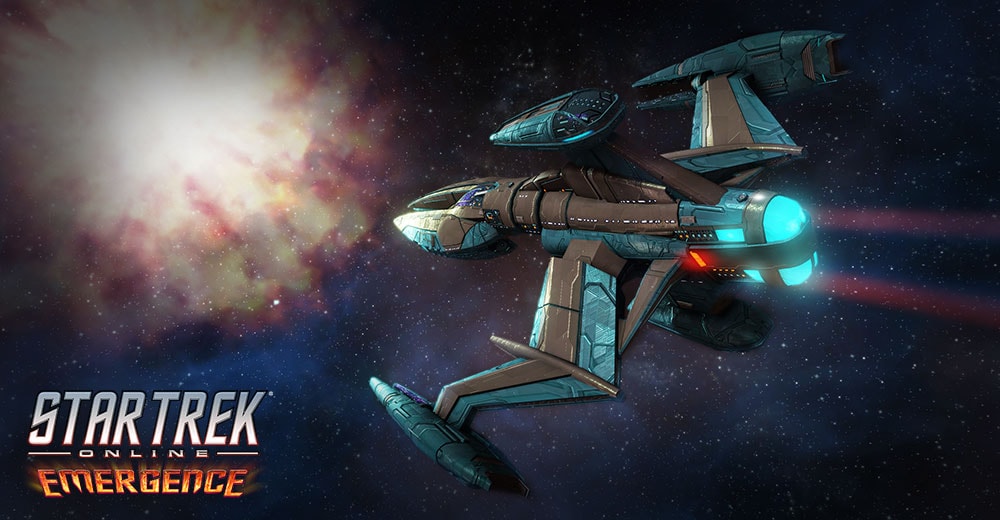 Tzenkethi forces loom, threatening life in every corner of known space, even as a dangerous and unknown threat surfaces. Amid this chaos, new technologies are being pursued by Alliance scientists and engineers in hopes of returning peace to the Alpha Quadrant. The latest projects have been exploring techniques common in the shipbuilding practices of species that haven’t typically stood at the forefront of the Alliance. These efforts have produced a new breed of Pilot Escort, representing a unique blend of these technologies.

Andorian members of the Federation have offered their superior mobility subsystems and targeting computers, while Lethean neuro-interfaces have been integrated to improve crew response times with other surprising results. Meanwhile, a team of scientists from the Romulan Republic have been studying and restoring ancient Dewan technology found in the ruins beneath the surface of New Romulus, whose findings include remarkable technology based on Iconian ingenuity.

These starships will soon be available in the C-Store and can be purchased by level 50 players (Vice Admiral and Lieutenant General ranks). There are total of 9 variants, 3 each being available for Federation, Klingon Defense Force, and Romulan Republic captains.

Ships from all factions share the same three Universal Consoles and Starship Traits with variants from the other factions.

As Pilot vessels, all the Escorts contained in this bundle will be capable of executing Pilot Maneuvers once every few seconds. These sudden bursts of movement can be of incredible aid in moving into or out of danger, or repositioning yourself to get the best tactical position at a moment’s notice. Each of these starships can perform a sudden maneuver in each horizontal direction: Forward, Backward, Left or Right. Executing each maneuver will rapidly reposition your starship while granting very brief damage immunity and costing all available thruster fuel, which takes several seconds to recover.

Among the relics of the lost Dewan civilization found on New Romulus were a number of partially-functional rudimentary attempts at reproducing the gateway technology of their Iconian masters. This console represents a refurbishment of one of those recovered attempts, and is capable of forming short-range gateways that link two locations in local space. Another source of short-range teleportation would typically not be a noteworthy breakthrough, but it has been discovered that this form of travel can be damaging and debilitating if enemy vessels are forced to make the transition. As such, the technology makes a capable weapon.

This console also provides a passive boost to Scientific Readiness and Control Expertise.

This technology was modeled after some of the principles found present in Lethean neurophysiology, but on a starship-sized scale. By injecting enemy subsystems with a specific blend of resonant frequencies, sentient beings can be briefly disabled via an oversaturation of sensory stimulii. When also subjected to overrides to environmental settings, this effect can debilitate enemy crews with minimal injury or loss of life. These attacks also wreak havoc on power systems in enemy vessels, causing numerous electrical overloads.

This console also provides a passive boost to Flight Speed and Resistance to Slowing Effects.

Cause a psionic energy resonance within the EPS of enemy ships when activating any Foe-affecting Engineering Bridge Officer Abilities. This is reflected by an Electrical Damage-over-Time effect that also Slows the afflicted foe's engines.

While this trait is slotted, your Gravity Well anomalies last twice as long, and recharge much faster. Additionally, the primary foe targeted by your Gravity Well activation will have their damage resistance rating reduced for the duration of the anomaly.

While this starship trait is slotted, activating Tactical or Pilot Bridge Officer Abilities will provide a bonus damage buff as long as you remain in combat. This buff stacks up to 5 times, but all stacks are lost immediately upon leaving combat.

This weapon was developed jointly between engineering teams from the Federation, Klingon Empire, and Romulan Republic. Design disagreements led to multiple energy types vying for inclusion in the final design, and rather than scrap it when the engineers failed to agree on this aspect of the design, they worked together to allow the weapon to utilize all simultaneously. This has resulted in an amalgamated projectile that closely resembles raw radiation across multiple volatile wavelengths.

This weapon fires in a 360 degree arc and has a chance of causing the additional effects associated with each of the energy types primarily associated with the three major factions - Phaser (Subsystem Offline), Disruptor (Damage Resistance Rating Debuff), and Plasma (Damage-over-Time).

Commissioning any of the ships in this bundle will unlock the ability to purchase specialized weapon sets from the Dilithium Store. Andorian Phasers, Lethean Disruptors, and Dewan Plasma weapons are each made available to the applicable faction, and each of these vessels come pre-equipped with a suite of these weapons as well.

These starships will be available in the C-Store individually, in faction-specific packs of 3 variants each, or as a single “Megabundle” containing all 9 starships.

Exact features, stats, and additional details regarding this fleet of unique Pilot escorts will soon be made available.