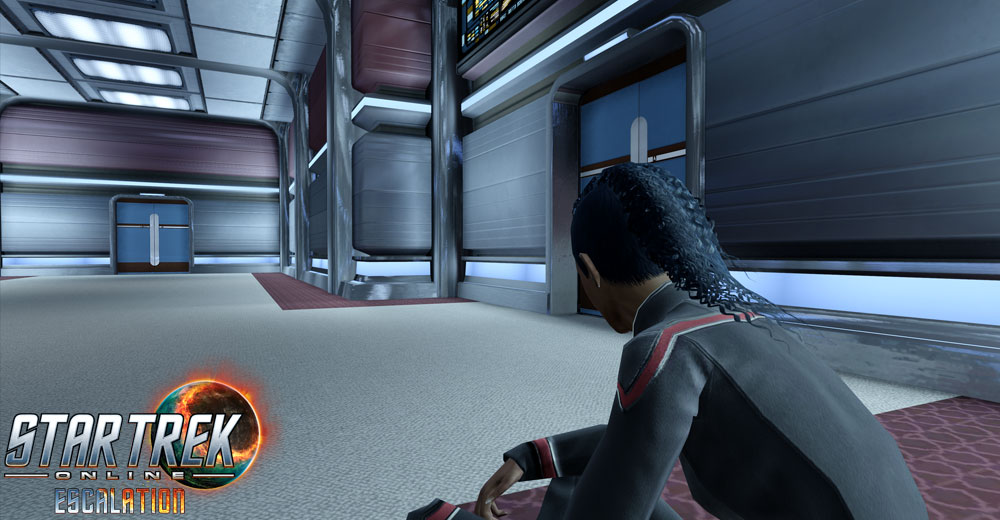 Fear was not an appropriate reaction for a Starfleet Captain.

No, that wasn’t right. Fear was absolutely an appropriate reaction. It kept a Captain sharp, focused on the task at hand when lives were at stake. But Captain Mallory Stanford had never, in her entire Starfleet career, felt like she wasn’t ready. She’d stood on the bridge of the U.S.S. Boxer and faced down Klingons, the Borg and more, leading her crew through crisis after crisis. Mallory had felt afraid plenty of times. She’d never felt unprepared. But the task facing her crew now was, quite literally, unbeatable.

She sat down in her ready room chair. Her first officer, had handed her their new orders, and Mallory had marched in here in a blur the moment she read them. With a reaction like that, the bridge would be buzzing with speculation. The crew probably thought they were being sent to the front lines. The irony is, she would have been ready for that. Instead, she found herself faced with two words she never thought she’d see again.

Cadet Stanford sank down in the hallway of Starfleet Academy. She had spent nearly forty minutes trying to find any part of this school that wasn’t full of people celebrating. It was the week before graduation, and there seemed to be parties everywhere. Nothing official, but they ranged from friends getting together for a quiet drink to the blaring music coming from the mess hall. This morning, she would have joined them. Now, she couldn’t stop shaking.

It was a stupid test. You were supposed to fail. That was the entire point – their instructors had drilled that into them before they took it. The idea was to test your mettle as a Starfleet Captain, to see how you handle a no-win situation. It wouldn’t determine whether she graduated. Why was she shaking?

No, it wasn’t the test, or that she’d failed. That wasn’t it. It was the content of the test. The simulations they ran at the Academy focused on diplomacy, exploration, and on combat, but none of them had ended like this. No matter what she did, more enemies appeared. Every order she gave seemed logical, but they all ended in disaster. The crew of the Kobayashi Maru had all died. Her crew had all died. She had died.

It was too much. Maybe she wasn’t cut out for all of this. She took a deep breath, and brushed her curls out of her face. Before she knew what was happening, she was standing and walking again. Her instructors would understand. A last minute transfer from the Command Track to a different program was nothing new, even this close to graduation. All that mattered was that she never experienced anything like this again. She thought she heard a voice calling her name, but she kept walking.

“Mallory!” the voice called again. She looked up. Striding down the hallway towards her was L’nel, from her astrophysics classes. They had barely ever spoken, but L’nel had been her helmsman in the test this morning. Her stomach grew cold and clenched up. This was about the test.

“It will not take long.” L’nel said, closing the distance between them. Now that exams were mostly over, cadets were free to be out of uniform until graduation. She was dressed casually, for a Vulcan. Mallory hadn’t even bothered to go back to her room to change, and she realized she must look haggard.

She stopped, and let the other cadet reach her, trying not to show the fear and indecision that made her veins into ice. What she wouldn’t give to have a Vulcan's emotional control right now.

“Thank me?” Mallory asked. That was – not what she had expected.

“I have been performing the role of Helmsman in the Kobayashi Maru simulation all morning. Your performance was the most exceptional I saw.”

“What? Everyone died.” Mallory said.

“Most of the cadets were under extreme duress at this first taste of failure. Many of them ordered me to do things out of fear that would have cost many more lives in much shorter order. One even ordered me, and I quote, to ’ram the nearest Klingon cruiser.’’

“While your decisions did not save our virtual lives,” L’nel continued, “we held out longer than could be expected. And you performed admirably under the pressures of command. In addition, I sense that you did so under extreme personal distress at the nature of the test.”

Ah, there it was, Mallory thought. She looked at the floor. This was the Vulcan version of pity. L’nel had sensed her emotions and come here to comfort her by lying to her. It was kind, but untrue.

“Thank you,” she said quietly, “but I have to go. There’s a lot I have to think about.” She turned to walk away.

“Mallory.” L’nel had a quiet steel in her voice. “I am in training to be a ship’s counselor. What you are currently experiencing is known as a panic attack. It is very common in your species. While Vulcans do not experience such things at that level, I do have experience in the loss of control that can come from overwhelming emotion. I have, at least three times during this our years at this school, allowed myself to consider leaving Starfleet Academy as a logical solution.”

Mallory tried to process this new information. L’nel had spoken to her before, mostly about class related issues. They had never had a conversation this personal.

“However, these attacks on us by our own psyches are not logical. They are not real. You performed admirably today, and in a test that was in any way fair, you would have saved many lives. You must decide now if what you experienced today will break you or not, but I assure you, you did not fail. If I had been a member of your crew, I would be honored to continue to serve with you after such a performance.”

A warmth spread through Mallory, and she felt her stomach muscles finally relax. L’nel was right, of course. This was a part of her life she would have to deal with, and she alone would decide whether it would control her, or she would control it.

“L’nel,” Mallory said, turning back with a wry smile, “if what happened today was real, you’d be dead.”

L’nel arched a brow, and it was the closest Mallory had ever come to seeing her smile. “A minor concern. Such things cannot break us.”

Mallory was less than a minute into her breathing exercises when the door chime to her ready room buzzed.

“Come in,” she said, putting down the PADD.

She looked up, and smiled warmly as her ship’s counselor entered the room.

The Captain gestured to the chair across her desk, and L’nel sat down. “Commander Hojo notified me that you left the bridge rather suddenly. Is anything the matter, Captain?”

The datapad slid smoothly across Mallory’s desk, and L’nel took a moment to study it before raising a single eyebrow.

“We are retaking the test?” she asked.

“Not just us,” Mallory leaned back in her chair. “The whole Alliance. Even the Klingons get to take a shot at this.”

“Fascinating,” L’nel thumbed through the mission information. “Do you think they are all prepared to fail as we did?”

Mallory laughed. “I hope so. How about the crew? Most of them hated the test in school. Do you think they’ll want another crack at it?”

“The crew tends to take great pride in beating unbeatable challenges,” L’nel replied. “I would not be worried about them.” Mallory nodded in agreement.

“And Captain,” the Vulcan counselor leaned forward, setting the data pad aside. “Are you all right with this course of action? Are you prepared to face the Kobayashi Maru again?”

A slow smile spread across the Captain’s lips. “Of course,” she said, “After all, such things cannot break us.”