In Legacy of Romulus, players will experience the story like never before through unique companion Bridge Officers brought to life. These unique characters feature voice work, character art, and personalities all their own. Chief among these is Tovan Khev, the player’s friend, first officer, confidant and counsel throughout the all-new Romulan adventure featured in Legacy of Romulus. This is his story.

Tovan Khev was born on the original home world of Romulus into a proud but humble family, which soon grew to include a younger sister, Rinna. Their father was a noble but distant soldier of the Romulan Empire, their mother an affectionate former academic. The family moved often, and in the year 2387, Tovan was off-world with his sister and mother, awaiting their father’s arrival at his newest post, when the Hobus supernova disaster occurred. This tragic cataclysm shattered their home planet of Romulus and claimed the lives of over 4 billion of its inhabitants – his father among them.

Afterwards, Tovan and his family were caught up in a frenetic wave of refugees fleeing the destruction. Only 9 at the time of the tragedy, his sister barely 6, Tovan was forced to transition rapidly to adulthood amidst the storm and struggle of migrant life. In the early days, Tovan thought bitterly of how the aspirations of their childhood had been cast cruelly out of their reach. Tovan had dreamt of life as a gallant warrior, fighting proudly alongside his father, and Rinna had imagined adeptly guiding spacecraft through the galaxy. Now the empire was hobbled and their home lost; there would be no noble fighting or flying amongst the stars – just fleeing from destruction and clinging to survival.

Meanwhile, in the aftermath of the disaster, the Tal Shiar emerged as a firm but tyrannical force for order amidst the chaos. They began to openly exercise lethal force in order to quell rampant rioting, rampages and pirating. One of their ‘raids’ targeted a small flotilla supposedly harboring fugitives. Weapons fire damaged the very ship on which Tovan and his family were also travelling, wounding many innocents as well - including their mother.

Yet the Tal Shiar who beamed aboard had no time for the wounded on either side. He watched as they clapped supposed dissidents and traitors in irons and took them away, leaving the dead and dying as they lay. The Tal Shiar ignored all pleas for help, vanishing into the blackness of space. Tovan remained by his mother’s side until the end; then he surrendered his mother to the darkness as well, and prepared to move on with his sister.

As they traveled, Tovan resolved to grow strong to protect those near to him. Tovan was a fearless and natural warrior – he’d learned martial discipline from his father, and now eagerly absorbed every lesson in combat, weapons and tactics from any migrant soldier or officer he chanced to meet. Driven by the pain of loss, rage or just the desire to do something – anything – the hotheaded youth grew strong. However, his need to lash out at some enemy (either real or imagined) also grew, and he seemed destined for a collision course with the countless thugs and drifters awash in the sea of desperate refugees.

However, destiny chose to put something else in his way - an orphan Romulan girl of passionate feelings and striking beauty named Charva. A chance meeting and the two were never far apart for long. Months passed as a young love blossomed. Soon, Tovan thought less of fighting, and more of his future. 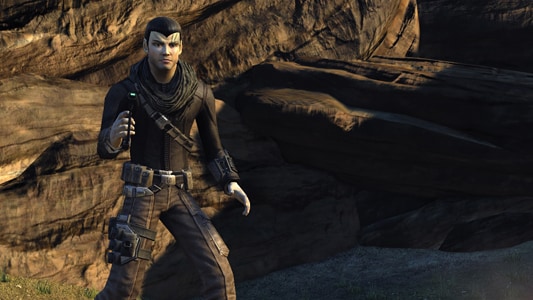 They talked often of their dreams of a better life for their people - a new home, and a new beginning where they could rebuild and carry on the best traditions of the Romulan people. Loyal to a fault, Tovan soon could not imagine spending his life with any other woman. However, on the eve he sought to express these intentions to Charva, she preempted him with news of her own – in order to secure the peaceful and unified future she imagined, she intended to join the Tal Shiar.

For Tovan, it seemed fate had betrayed him again. That Charva had her own reasons, including a belief in the greater good and the potential for the Tal Shiar to use their power for right, held no consolation for him. His fear and contempt for its shadowy conspirators overwhelmed all, and he feared Charva would be consumed and corrupted by their ranks. Yet, she would not be dissuaded, and after a mournful parting Tovan resolved to continue on again.

At last, Tovan and Rinna found a new home of sorts and steady work on a remote mining colony in Hfihar. Tovan’s skills as a natural leader and tactician, along with his skill with a disruptor, led to a rapid rise through the ranks of colonial security. He more than proved his worth in helping to defend the colony in a number of scraps against raiders, thieves and pirates. In time Tovan seemed to overcome his troubled past and budded into a confident, if sometimes cocky, young man. Meanwhile, Rinna had been pursuing her burgeoning talents as a pilot, apprenticing on the shuttles which transported goods and ore back and forth from visiting ships to the colony.

It seemed they had at last found some measure of stability. Still, his current home, though far from the prying eyes of the Tal Shiar, was no place to raise a family or settle down. Once more, Tovan began to dream of a better future for himself and his people.

A chance encounter with a passing Romulan traveler named D’Vex - an experienced spacefarer, pilot and scientist - brought the opportunity he had been anticipating. D’Vex was looking for recruits to begin a new colonization effort under the leadership of a former Senator named Malem on a small but promising planet called Virinat. Tovan’s passion for the endeavor, plus his reputation as a capable and honest security officer, was more than enough to recommend him as the newest member. The colony would be equally welcoming to Rinna.

All seemed well with the universe, but there was to be one last heartbreak. Opportunity, it seemed, was calling her in another direction. After so many long years together, a chance to realize her own dream of becoming a space-faring pilot was at hand. He made her promise to visit, and with an emotional farewell, both brother and sister went their separate ways in search of their dreams.

Now, years later, Tovan is a key member of the fledgling and fertile agricultural colony on Virinat – a success thanks to much back-breaking toil and the colonists’ many efforts. At times he looks up at the stars with hope for what the future will bring; perhaps another visit from Rinna with new tales of the universe beyond.

With Virinat as his home, Tovan’s search for a new beginning seems finally to have ended. But one thing is certain – for Tovan Khev, a new adventure is about to begin.