All hands to your stations, senior officers to the bridge! Cryptic Studios’ Star Trek Online, alongside Modiphius’ Star Trek Adventures, in partnership with the Streampunks, are excited to announce STAR TREK FLEET WEEK! Beginning October 10 and ending October 15, FLEET WEEK is celebration of the starships that take us boldly into the final frontier.

In this new era of Star Trek, starships are constantly joining the armada with more appearing in every new TV show, film, comic, book, tabletop game, and video game. But the starships of Star Trek are more than mere vehicles. Through them, our heroes chart strange new worlds, build communities, and explore the human condition. Like their crews, the audience comes to know the ships of Star Trek as characters themselves. These starships are homes, they are protectors, and they are companions. For decades fans have discussed, dissected, designed, and depicted Star Trek starships. For over half a century, the starships of Star Trek have inspired scientists, artists, and even politicians to imagine a hopeful future for humanity.

STAR TREK FLEET WEEK, an event dedicated to these majestic starships, will begin on Monday, October 10 and culminate with Admiralty Day on October 15, a day full of panels packed with experts and Star Trek Veterans excited to celebrate and discuss Star Trek and its starships: how they look, how they work, and what makes them so special.

Join us live at https://www.twitch.tv/crypticstudios once FLEET WEEK is underway! We’ll be announcing details soon so stay tuned for more info about our panels and guests. Until then, save the date and set a course for FLEET WEEK!

The week kicks off with a series of livestreams and panels from Star Trek content creators!

FLEET WEEK kicks off with a community livestream hosted by @thedarkmomconsortium, a livestream production of the STO Fleet Strike Group Armada! They’ll be joined by Star Trek Online’s Associate Art Director Thomas Marrone to discuss the latest game developments and play STO with the community.

Star Trek Online’s associate Art Director leads a panel of naval veterans, intelligence analysts, and literal rocket scientists as they talk about Star Trek, Starfleet, and Starships from the perspective of people who have served, flown, and even designed complicated military equipment in the real world.

Star Trek Online’s weekly community live stream will be back on Wednesday this week, but with some exciting new ship reveals and special guests from the STO Team. 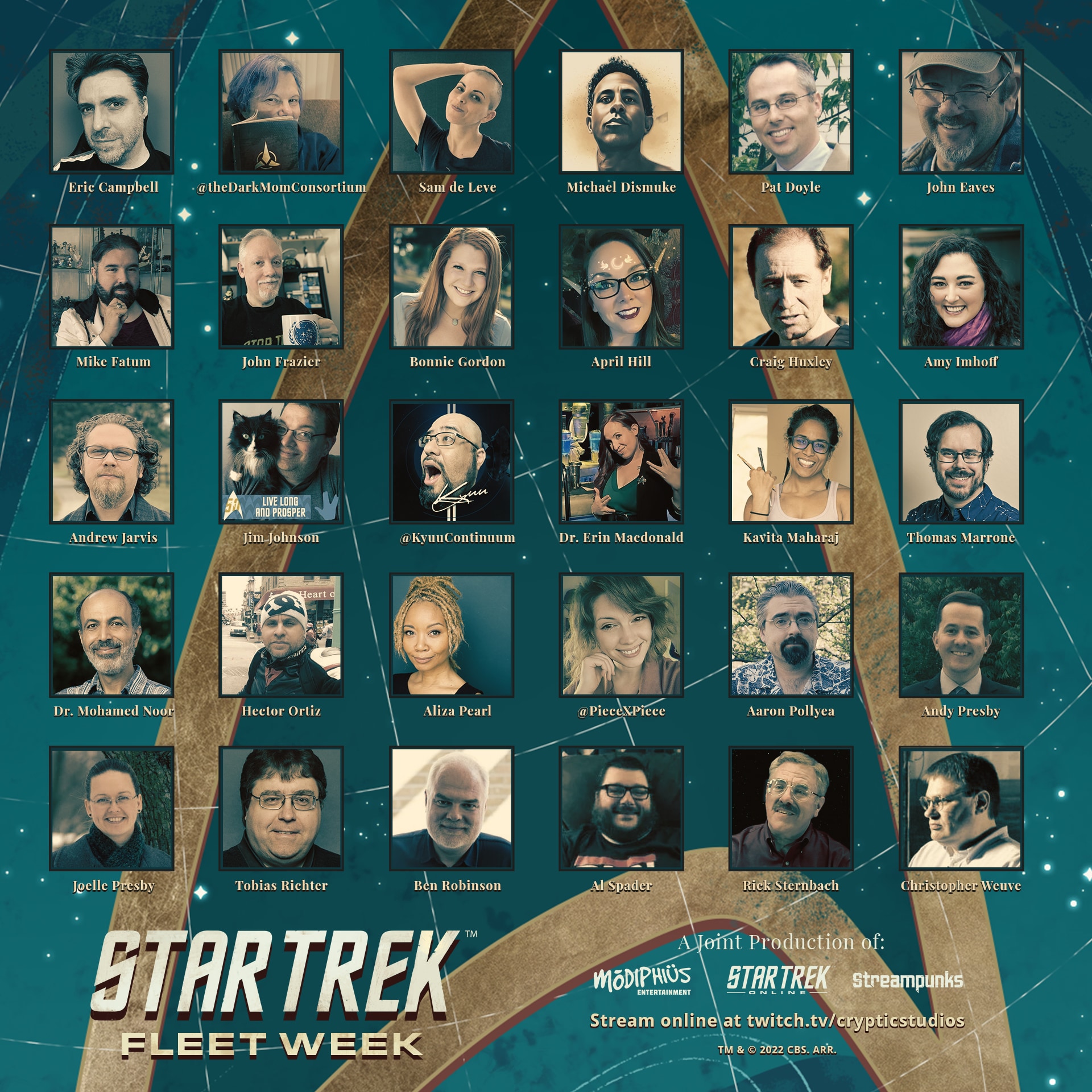 FLEET WEEK culminates with a day full of panels of Star Trek luminaries. These TV, film, and game veterans will come together to discuss the science and magic that brings Star Trek’s unforgettable starships to life on our screens and in our imaginations.

The Science of Starships

Star Trek has been a fixture of Science Fiction for over 56 years, and a key element of that staying power is the franchise’s relationship with our actual scientific understanding of the universe. Join an all-star panel led by Amy Imhoff, including Dr. Erin Macdonald, Dr. Mohamed Noor, and Rick Sternbach, to discuss the real-world science that inspires the shipwrights of the final frontier.

Form and Function: The Art of Starships

The Starships of Star Trek Adventures

Tales from the Streampunks Frontier

Star Trek Online’s Associate Art Director Thomas Marrone hosts a panel of Star Trek creators who have made it their mission to bring a bit of the Final Frontier into our homes. Thomas will be joined by Ben Robinson, formerly of Eaglemoss’ Star Trek Official Starships Collection, John Frazier of Star Trek: Unlimited, and Kavita Maharaj of Retrospect Studios.

Star Trek: Picard from the Keel Out

Star Trek: Picard’s second season gave us a look at Starfleet at the turn of the 25th century. We’ll conclude Fleet Week with special guests from the actual Star Trek: Picard production time for a discussion about how the Art Department, Set Design, and VFX teams worked together to bring the starships of Star Trek: Picard to life.

We can't wait to see you all for Fleet Week. Set a course for the stars, and never look back!