Calm Before The Storm 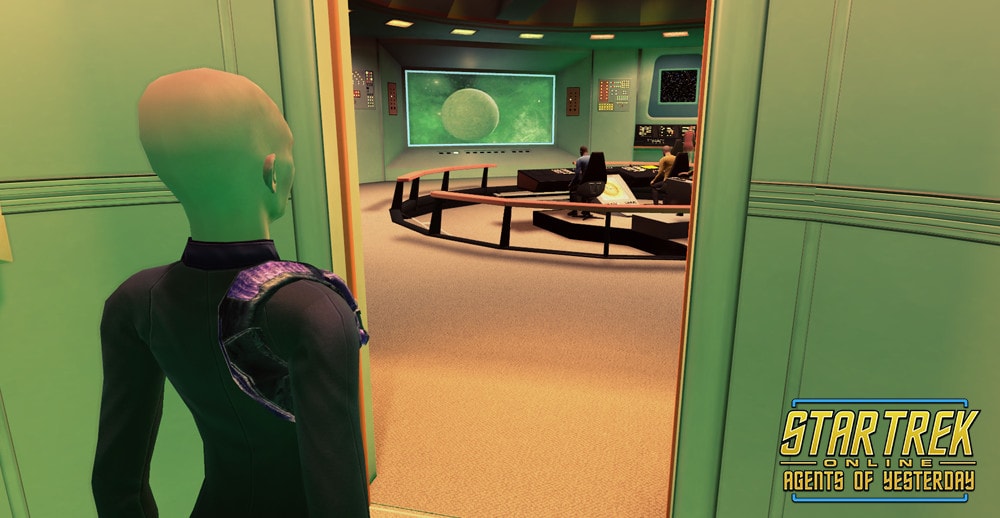 “Let me see if I understand the situation,” Laarme mused to the nearby science officer.  “An alien entity has seized control of Enterprise, and appears to be manipulating us to attack our Klingon… guests at regular intervals, and vice versa.  Those who fall in battle are quickly restored to a state of full health. We are gradually losing ability to reason, in favor of a desire to engage in mortal combat.”

The science officer arched a single eyebrow before replying.  “That is an accurate summary of recent events, Captain.  Logic suggests - “

The chief medical officer glared at them both.  “Logic? While you’re talking about logic, Spock, the Klingons are planning attacks. This is a fight to the death.  We’d better start trying to win it!”

Laarme smiled reassuringly at the CMO.  “Doctor, should our collective mental state continue to deteriorate, violence will be the only solution available to us – and we’ll be locked in an unending war with the Klingons.  Mister Spock and I are trying to find a solution that restores our free will – and, ultimately, our lives.”

“I never thought I’d see the day where you’d side with Spock in a clearly military situation… Captain.”  McCoy stormed off toward the bridge turbolift, nearly bowling over the officer who emerged from it.  “Maybe you can get through to them!” he muttered angrily as he entered the lift.

“Well, I certainly can try, Doctor,” replied Captain Kuumaarke with an amused smile as the lift door closed behind her.  “Computer, pause program, please.”

The holodeck simulation came to a halt as Laarme stood to salute the newly-arrived Lukari officer.  “Greetings,” he said somewhat nervously.  “Would you care to join the simulation, Captain?”

“Another time, perhaps.  We had a 3rd meal appointment, Doctor Laarme.  I thought I’d see what was keeping you,” Kuumaarke replied as she leaned against the nearby red safety railing.  “It appears you have some Klingon trouble.”

“Ah, yes, well – I’ve been studying a number of Federation historical simulations since they brought me out here as a consultant.” He stood up from the captain’s chair and faced Kuumaarke.   “23rd century Federation history is intriguing!  They have such a storied history of exploration and contact with alien cultures both benign and...” Laarme’s voice trailed off in embarrassment as he noted the amused look on Kuumaarke’s face.  “But you’ve met them and this is certainly not news for you and… 3rd meal, did you say?”

“I did,” Kuumaarke smiled.  “As a xenoarchaeologist, you should enjoy the culinary selections I’ve replicated.  Earth cuisine – they call it ‘barbecue’.”

Laarme grinned widely as he walked toward the holodeck exit, nodding at the paused holoform of Spock before it faded from view.  “Until next time, Commander.  Peace and long life.”

“I believe I know my next holiday destination, Captain,” Laarme said as he enjoyed his meal. “Kansas City. I feel it is a culinary imperative to experience this cuisine in its original, unreplicated form.  As a scientist, of course.”

“Of course,” replied Kuumaarke.  “You may be the first Lukari I know who wishes to visit Earth… to study food.”

“You can learn a lot about a culture by studying what they eat,”  said Laarme as he reached for another sparerib.  “Or don’t eat… did you know that Tholians refuse to eat meat?  They believe it introduces ‘corruptive impurities’ to their bodies if consumed.”

“I… haven’t heard that,” Kuumaarke said softly.  “The Tholians I’ve encountered were more intent on killing me than discussing their dietary choices.”

Laarme blanched at his faux-pas.  “My apologies, Captain.  I didn’t mean to bring up unpleasant memories.  I sometimes forget that the Tholians nearly foiled your efforts to restore our sun and save the homeworld.”

Kuumaarke smiled as she refilled her glass.  “It’s all right, Doctor. My experiences should, I hope, serve both to inspire as well as inform any Lukari with an eye on a career in space exploration.”  She enjoyed some of the fine red wine before continuing.  “Speaking of exploration… there’s an important matter I’d like to discuss with you.”  She paused, seeing that she had the young scientist’s full attention.  “You’ve clearly expressed an interest in seeing what’s out there.  To that end, I’d like to enlist your aid in the inaugural mission of the L.S.S. Concordium.”

Laarme blinked several times.  “But… I mean, I’m honored, but… why me?  Captain, I’m a research scientist, not a soldier.  I’ve never been to space once, and I’ve only fired a simulated phaser in the holodeck.”

“Contrary to what you may have heard, this isn’t a military mission, Doctor,” said Kuumaarke.  “It’s a mission of exploration and discovery, and for that, we need scientists like you.” She paused to sip her drink before continuing.  “Your cadre at the Lukar Institute gave you a sterling recommendation.  Your work on xenoarchaeology at Renaave University is nearly universally acclaimed – “

“Probably because I’m the only researcher publishing xenoarchaeology papers at Renaave,” replied Laarme.  “It’s not like I work in a crowded field, Captain.  We’re a far cry from places like the Daystrom Institute.”

“Don’t be so hard on yourself, Doctor,” Kuumaarke said.  “The acclaim I speak of comes from sources outside of Lukari.  Scholar T’Ven, for example.”

“The Vulcan Science Academy, to be precise.”

“T’Ven of the Vulcan Science Academy has read my work?”

“She has.  She found it to be satisfactory, if memory serves.”

“Satisfactory,” Laarme quietly placed his sparerib on his plate and took that in.  “From a Vulcan… are you sure she used that word?”

Kuumaarke smiled widely.  “I can find a PADD and bring up the correspondence, if you like.  But yes, I believe that was the word she used.  I asked her to evaluate the work of several candidates we’ve been considering for the position of ship’s xenoarchaeologist.  She was kind enough to oblige.”

“I… I see,” stammered Laarme in response.  “That… that’s overwhelming, Captain.  I’d be worthy of ridicule if I turned the position down now, wouldn’t I?”

“I would certainly be disappointed if you did, but I don’t think it would be an offense worthy of ridicule,” Kuumaarke said.  “Failing to wipe the barbecue sauce from your chin, on the other hand…”  She laughed for a moment as the scientist awkwardly swiped at his face with a napkin.  “We need our best out there, Doctor.  We need minds that seek understanding, knowledge… officers whose first thoughts when meeting a new culture aren’t those of fear, hatred, or violence.”

“I’m honored to have the opportunity, Captain,” Laarme said as he set his napkin on the table.  “And I accept the offer.  Gladly!”

“Welcome to the crew, Doctor,”  Kuumaarke said as she raised her glass.  “I look forward to seeing what’s out there with you.”

Laarme grinned as he raised his glass in response.  “Likewise.  I suppose I’d better replicate a uniform… “

“Make sure it’s a Lukari uniform,” Kuumaarke replied impishly. “Though I think you look fine in Starfleet gold, I don’t think our admiralty would approve.”

Laarme looked down at his current attire, which he hadn’t changed since his earlier trip to the holodeck, and blushed.