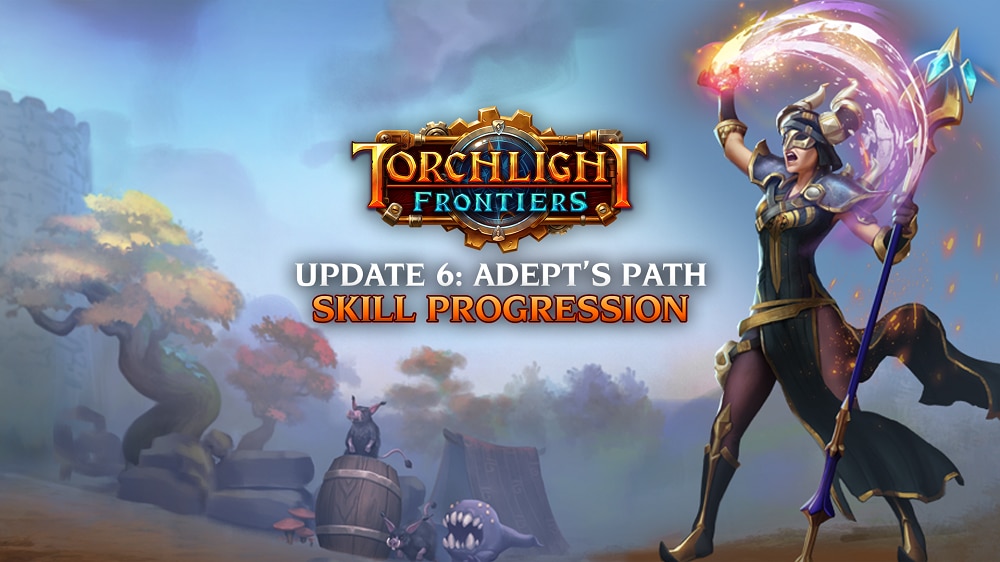 Update 6: Adept’s Path, scheduled for release on Tuesday May 21, includes a new skill progression system and a leveling rebalance!

Why’d you make these changes?

The impetus comes straight out of player feedback: skill progression was unclear and the pacing felt off. We took a step back and asked ourselves what principles we’d use to guide us during a revamp.

Once we shared the proposed changes in our original forum post, our testers helped us brainstorm and refine the ideas presented below. For those already following the skill progression conversation on our forums, Discord, and other spaces, thank you! Your input has helped make Torchlight Frontiers stronger.

Players now earn one Skill Point for every Frontier Level they gain up to a maximum of 100. These points are invested on two unique skill paths for each class: Brawl/Barrage for Forged, Dark/Light for Dusk Mage, and Lineage/Conductor for Railmaster.

The Railmaster’s Lineage path features both ranged and melee skills.

Skills on each path are divided among tiers. You’ll need to invest points in previous skills and tiers, as indicated by the tool tip, before you gain access to later tiers. You can invest a maximum of 12 points in each skill; in some cases, the point investment also synergistically boosts other aspects of your class’s strengths.

Investing points in Dark Spears increases the skill’s duration and also boosts all Light skills by reducing their mana costs.

How does the leveling rebalance fit in?

It’s all to do with pacing. Your skill progression is now directly linked to your level, so the pacing has to be adjusted. We’ve doubled the rate at which you gain levels. Additionally, and thanks to player suggestions, we’ve greatly increased the amount of XP received for defeating bosses and champions, and added XP rewards to quests. All of these changes feed into making the skill progression system feel natural, but it also requires that we overhaul the level ranges of the existing Frontiers.

Frontier zone levels now span from 1 - 30. This means that various adventuring areas have had their level ranges expanded. For example, Wood’s Edge was level 1-2 and will now be level 1-6 after the update. Making these changes actually involves an entire network of adjustments:

All of the above is phase one of the conversation and revamp. Once the system is in players’ hands, we’ll roll their evaluations and assessments into the next wave of iteration and improvement. We’re already working on a few additional elements we’ll share details on at a later date. Again, thank you for all your contributions so far!